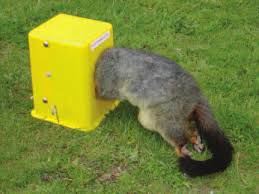 Those classic yellow (or sometimes red or green) plastic box traps that you see on the ground are called Timms Traps.

Timms traps are an effective trap for use in possum control in a domestic environment as they are easy to set and reasonably cheap.

These are our recommended guidelines for using Timms traps

To unset a set trap do not ‘dry fire’ the trap by kicking it etc, as this can damage the trap and shorten it’s life. Hold the setting cord tight against the back of the trap with your fingers while hooking your thumb over the top of the trap unit, this will ensure the trap will not go off. Use your other hand to access the bottom of the trap (this will depend on how the trap is set up, see below) and reach in behind the kill bar, pushing it towards the front of the trap to gently release it from the set position, slowly release the cord with the other hand, allowing the kill bar to raise up to the unset position in a controlled movement.

Never put your hands in the front opening or in front of the kill bar from underneath.
Timms traps are best baited with a piece of fruit, e.g. apple sprinkled with cinnamon, lemon or orange peel etc. Use small to medium size pieces of fruit (e.g. 1/8th of an apple) to encourage possums to reach into the trap and grab the bait with their mouths instead of reaching in with their paws. Do not be tempted to use large pieces of fruit as this can affect the trigger mechanism and make it harder for the possum to set the trap off.

To attract possums to the trap, make up some ‘blaze’ out of white flour, icing sugar and cinnamon. Throw ‘blaze’ into the trap and around the trap, this will help to attract animals by sight, smell and taste.

Position the trap where it can be seen every day, one of the disadvantages with Timms traps is that they are not easy to clean if there is an old catch in them, it is much easier if the possum is fresh.
If using a Timms trap in a Kiwi area (which is potentially anywhere on the Tutukaka Coast now, Yay!), they should be mounted at least 700mm off the ground to ensure kiwi can’t access them. One way of doing this is to mount the trap on a piece of 6×1 timber (Fence palings are ideal). Attach the timber to a tree or post to form a ramp, and attach the trap to the ramp by means of two rebated strips of timber at the front and back of the trap base that the trap can slide into sideways.
If using the trap in a non-kiwi area it can be secured to the ground with pins

To Set the Trap

Position the trap where it is to be set, hold it firmly with one hand on the top of the trap unit, pushing down, while pulling the setting cord at the back up and out from the trap. Gently release the cord to ensure the trap is set.

If the trap will not stay set, ensure that the bait is above the point where the kill bar touches the bait pin.
The sensitivity of the trap can be altered by bending the bait pin forwards (more sensitive) or backwards (less sensitive). 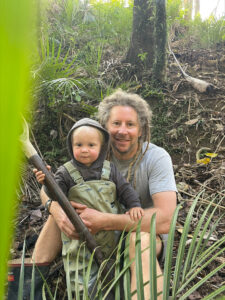 Josh and Jo have a 15ha block in Saqa Way, Matapouri on the beautiful Tutukaka Coast, they are committed to restoring the land back to native forest and need help to remove wilding pines. We will put END_OF_DOCUMENT_TOKEN_TO_BE_REPLACED