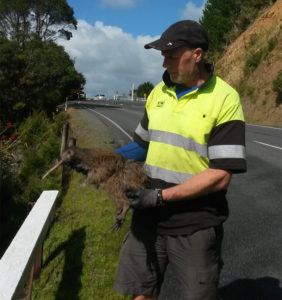 This kiwi was discovered by Tom Braithwaite, on his way from Tutukaka towards Ngunguru last Monday night.

He actually passed it, thinking it was a dead possum, then realising it was a kiwi, did a U turn and moved it to the bush beside the road about 50m before the Lookout parking. After posting its demise on a Tutukaka Facebook page, I was informed and together with Clayton we salvaged it and passed it on to Rolf Fuchs, our local DOC kiwi expert.

We would say it was definitely a road kill. Quite a young bird, no more than 15 months old, in good condition, and most likely female, weighing approx. 1.2kg. It’s always a little difficult to positively identify the sex of young birds.

Special thanks to Tom for being so alert.

Sad that its dead, but a positive that young birds are hatching and surviving on our coast. Definitely a tribute to the predator trapping effort by our Tutukaka landcare trappers, Clayton and Cameron McInnes, in taking out most of those nasty stoats and feral cats that would otherwise decimate our kiwi chick population.

Meri Kirihimete! Merry Christmas and Seasons Greetings! Our Tutukaka Kiwi are all keeping us on our toes with four more Kiwi gals to keep an eye on and Harry playing Houdini - here is an update on END_OF_DOCUMENT_TOKEN_TO_BE_REPLACED