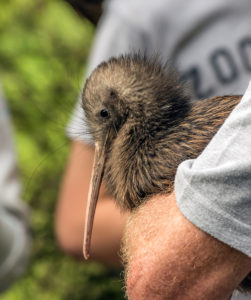 Sandy Bay locals who have defended their resident kiwi population with intensive predator trapping for more than a decade have welcomed an addition to their local kiwi tribe.

Kokiri, a six year old male North Island Brown Kiwi was released into a temporary, human dug, burrow in a protected valley less than a kilometre from the beach on Monday night, November 27.

Earlier in the day he had been caught by kiwi handler Todd Hamilton on Limestone Island, the kiwi crèche in Whangarei Harbour, where he had been placed as a chick to mature in the safety of a predator free environment. 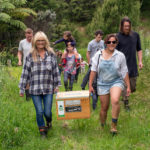 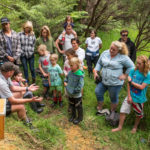 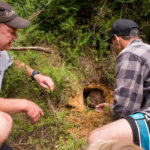 The healthy 2kg bird was named after a prominent local point, Kokiri Kaone, which was once a Pa site overlooking a well known fishing ground where leatherjacket, a small, sweet tasting fish called kokiri were known to breed.  Kokiri can also mean to champion a cause or to rush forward.

Kokiri was fitted with a radio tracking device which will allow him to be monitored while he adapts to his new environment and hopefully pairs up with one of the area’s resident females.

About 30 people, including 10 local children gathered to welcome the new kiwi bloodline into their hinterland.

Meri Kirihimete! Merry Christmas and Seasons Greetings! Our Tutukaka Kiwi are all keeping us on our toes with four more Kiwi gals to keep an eye on and Harry playing Houdini - here is an update on END_OF_DOCUMENT_TOKEN_TO_BE_REPLACED