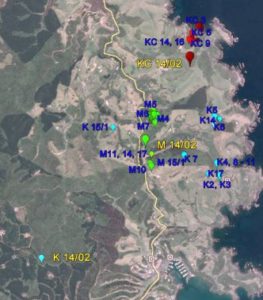 One of the three kiwi released on the Tutukaka Coast late last year had been ‘missing in action’ for at least three weeks – until yesterday.

Initially Ko marohi settled into a pattern marching back and forth between Matapouri Lodge and Middle Ridge road. Mid January Ko crossed Matapouri Road and began to move around various inland properties – John and Glenda’s, Stu, Rob and Liz – and then silence. Where had he gone? Back towards the coast – no. Further north – no, south towards Tutukaka – no.

We headed to the highest hills on the coast hoping to pick up a faint ping on the radio tracking gear to lead us in the right direction. At Yvonne and Al’s we could clearly hear Milo’s transmitter but no Ko. At the very back of Bluewater Farm Park there was nothing; at another high point to the north overlooking Tutukaka Forest nothing.

Finally Mike went to a high point on his property at the top of Waiotoi Road and pointed the receiver towards the coast – PING, PING – at last we knew he was alive and had a rough idea of where he was – deep in Tutukaka Forest – but that was at least 3 kilometres away.

Heading back to Bluewater Farm Park we still couldn’t pick up his signal but walked onto the Te Araroa Trail to get closer. At the end of a forest track we emerged from native bush into young pine and then out onto an old skid site overlooking Waiotoi Road and picked up his signal across another valley towards Ngunguru. Hoping to narrow down Ko’s location Mike came around to Waiotoi Road and followed the Te Araroa Trail back up towards Tane Moana where he picked up Ko’s signal again. Check out the attached map to see how far Ko has walked.

We will be tracking him again today because we do not want to lose him again and very soon we will need to actually catch him to physically check his transmitter. By then he might be at Ngunguru – heading for the school perhaps- be brave Ko Morahi.

Meanwhile – Milo has continued to stroll around his territory on the eastern side of Matapouri Road and is currently tucked in just below Daryl’s house.

Kicker, after at least a month at the beach has moved slightly south on Tawapou Farm and up into a raupo wetland, which is not a bad idea considering how dry it has been.

There have been a number of sightings and reports of kiwi out during the day in paddocks and on the sides of roads. Some kiwi have been in a poor state because of the dry conditions and one has been taken into Robert Webb at the Whangarei Bird Recovery Centre. Finding these wild kiwi reminds us that they could be anywhere – so please watch out for our kiwi.

Please remember the biggest threat to kiwi in Northland are dogs and even the smallest dog can kill a kiwi. If you are walking your dogs please keep them on a lead or under close control.

Meri Kirihimete! Merry Christmas and Seasons Greetings! Our Tutukaka Kiwi are all keeping us on our toes with four more Kiwi gals to keep an eye on and Harry playing Houdini - here is an update on END_OF_DOCUMENT_TOKEN_TO_BE_REPLACED