Story and photos by Malcolm Pullman

Matchmaking on the Tutukaka Coast took a leap forward on Friday when three female kiwi were released near where three male birds were let go last year. 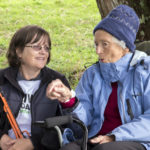 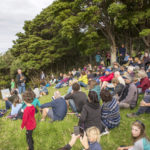 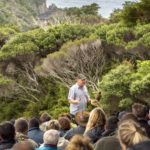 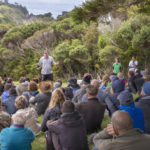 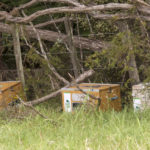 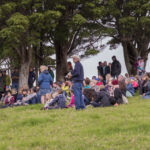 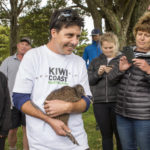 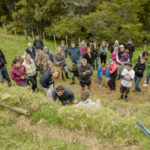 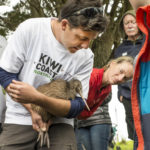 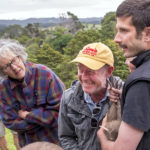 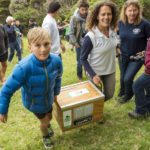 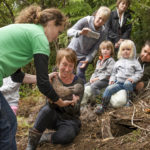 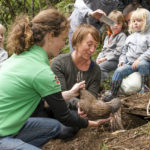 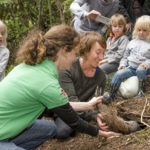 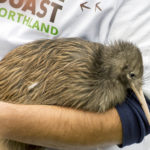 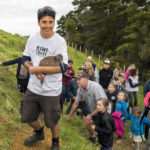 More than 200 people turned up at the Bowden family’s Tawapou property to see the latest release and learn about the extensive trapping, conservation advocacy and revegetation work under way on the coast. Tutukaka Land Care spokesman Mike Camm said the number of people who turned up on a windswept hillside with rain threatening showed how enthusiastic the community was to support their local wildlife.

To follow the 3 new kiwi on their big adventure, signup to the new Kiwi Coast “Follow a Kiwi” Programme…

Having radio transmitters on some of the birds so they could be tracked and people kept up to date with where they were wandering had helped engage the community, making it easier to get across the message about the need for good dog control. While juvenile kiwi were susceptible to predation by stoats and cats, adults were able to fend off many smaller predators. But they remained susceptible to wandering dogs, which were particularly attracted by the kiwi’s strong smell.

The introduced kiwi would help bolster the local remnant population of the birds, said Mr Camm.

Tutukaka Land Care employs professional trappers to back up the work being done by volunteers. TLC is part of the wider Kiwi Coast Initiative which, with new backing from the Northland Regional Council, now has more than 100 projects under way throughout Northland.

For a number of reasons, it was fitting that Loren Hope was one of the people given the honour of holding a kiwi and releasing it into the wild. The Tutukaka Coast resident is the “Earth Ed” teacher at waterside Ngunguru School. She developed the independent programme spearheaded by the school three years ago to teach all pupils “ecological literacy and kaitiakitanga”. She works alongside the hapu of Ngunguru and Rodney Ngawaka in helping bring to the pupils an understanding and a role to play in caring for their environment.

Ms Hope said she is very proud to work at the school which occasionally has dolphins in its front yard – the estuary – and kiwi in its backyard. “It’s such a privilege to work there and share my passion,” she said.

In Earth Ed, the youngest children start with a familiarity course, including how to feel confident in the outdoors. Years 2 to 3 take an active role as kaitiaki for local freshwater quality programmes, while Years 5 to 6 concentrate on the Ngungru estuary and sandspit. They help in a Northland Regional Council programme to trap the Asian paddle crabs threatening to colonise the estuary. They also monitor pipi and cockle numbers and health, and help remove invasive plants from the northern end of the sandspit.

Meri Kirihimete! Merry Christmas and Seasons Greetings! Our Tutukaka Kiwi are all keeping us on our toes with four more Kiwi gals to keep an eye on and Harry playing Houdini - here is an update on END_OF_DOCUMENT_TOKEN_TO_BE_REPLACED