On a slightly grey and damp day in March we decided it was time to check up on one of our three local kiwis, Kicker.

Kicker hatched in Riponui in September 2012, his dad was ‘The Knight’, and he already weighed 270g and had a 45.6mm bill length when he was transferred to Limestone Island at 10 days old. He was recaptured at Limestone Island in 2016 while he was fighting with another bird; which is how he earned his unique name! Kicker was over 4 years old when he was finally released into Tawapou’s forest, which gave him a head start against any would-be predators.

We knew that Kicker would be needing a battery replacement in his transmitter by now, and we suspected that he’d be needing a looser leg band too, so this was the perfect opportunity to check up on his general health and wellbeing while attending to the necessities. We gathered at the stunning forested site out at Tawapou, donned our packs and set off into the bush.

Our group consisted of Tutukaka Landcare Coalition members, Northland Regional Council representatives, journalists, media professionals and kiwi lovers – and the ages of those present ranged from 9 to nearly 80! We’re a diverse bunch of eco warriors out here on the Tutukaka coast, and the chance to see Kicker in his natural habitat had us all excited and ready to get tracking. After a quick briefing on where we would be heading and what we could expect when trying to locate Kicker, our group headed off into the leafy green of Tawapou’s stunning native forest. 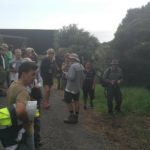 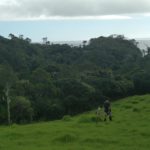 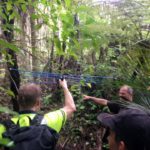 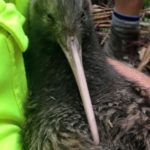 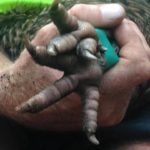 It didn’t take long to become fully enveloped in Tawapou’s forest – a few steps in, and the light deepened, filtering through the forest canopy high overhead. Kicker’s natural habitat is a rich, ecologically diverse environment, and finding him would have proven impossible were it not for the handheld tracking antennas carried by our group. We walked quietly. We listened, we moved carefully towards Kicker’s signal, and eventually we found our way through the undergrowth to his well-constructed home in a large clump of native grass. At least, the tracking device told us we we’d found him; actually pinpointing him in amongst the dense foliage of the plant was a lot more challenging. Before delving into the sharp-edged native grass, we were told to spread out in strategic locations, effectively surrounding the area where he was hiding in preparation to catch him should he decide to make a run for it.

Catching a kiwi: it’s trickier than it seems!

It turns out that Kicker was more interested in playing possum than trying his luck out in the open, so after a fair amount of fossicking, we spotted him snuggled up in a perfect kiwi-shaped hideout, relying on his natural camouflage to keep him safe. Kicker has made a fantastic home, with multiple escape tunnels and a great network of cosy depressions to curl up in, and we can tell that he’s really settled in well at Tawapou. We handled him respectfully, weighed him and measured his bill before working on his transmitter and leg band. Throughout our ministrations, Kicker remained calm and still – for all the world looking like he was enjoying himself! We were all impressed with how fat and sleek Kicker had become, putting on a healthy 220g since his last weigh in. We suspect he’s ready for a mate, but we’re pretty sure he’s not going to be keen on leaving his well-designed home, so she’ll have to be open to moving in with him!

A successful day for Tutukaka Landcare, and a happy, fat sleek and healthy Kicker released back into his ideal environment.

We’ll catch up with Kicker again soon, but until then, kia kaha little friend, and kia tupato!

Meri Kirihimete! Merry Christmas and Seasons Greetings! Our Tutukaka Kiwi are all keeping us on our toes with four more Kiwi gals to keep an eye on and Harry playing Houdini - here is an update on END_OF_DOCUMENT_TOKEN_TO_BE_REPLACED