The Kowhai’s tubular yellow flowers herald the beginning of spring, of the winter fast being over for many of our native birds, of the planting time for kumara and the time to harvest kina (sea urchins) and tipa (scallops) while they are in their prime. 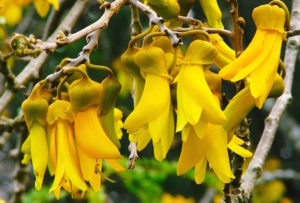 The kowhai’s flowers signal another highlight for me, the arrival of the Pipiwharauroa or shining cuckoo.  You are more likely to see the shining cuckoo at this time of the year as they forage ravenously after their long flight back to New Zealand on the kowhai moth caterpillars (Uresiphita polygonalis) .  Unlike a lot of birds, the cuckoo has the ability to eat toxic insects like hairy caterpillars  including those of the monarch butterfly, the red admiral butterfly and magpie moth.

This year, as with the last three it’s their distinctive call that alerts me to their presence, the high pitched repetitive whistle followed by a sigh that sounds like a descending ‘chewww’. 2017  we recorded our first ‘hearing’  on 25th August, 2018 and  2019 were both on the 21st August.

While you are more likely to hear rather than see Pipiwharauroa, we are lucky enough to see them most years with they’re pint sized adopted parents (Grey Warbler) racing about madly trying to feed an oversized fledgling. 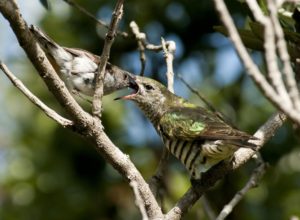 Here is a shortcut to help identify the Shining Cuckoo.

If you think you have seen or heard one you can record it in the NZ Bird Atlas Project (https://birdatlas.co.nz) which is set to map bird species over the next five years. Here’s another handy link for recording shining cuckoo.

Let us know here if you need help here (record date, time and location) and we can log this for you.

Meri Kirihimete! Merry Christmas and Seasons Greetings! Our Tutukaka Kiwi are all keeping us on our toes with four more Kiwi gals to keep an eye on and Harry playing Houdini - here is an update on END_OF_DOCUMENT_TOKEN_TO_BE_REPLACED