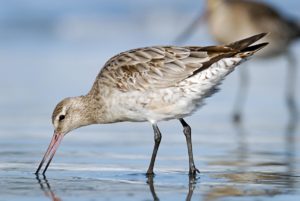 Every spring, bar-tailed godwits make the 11,000-kilometre journey from Alaska to New Zealand.

This is the longest nonstop flights of any non-seabird, and, unlike a seabird, there is no chance of an inflight snack. They are the most numerous tundra-breeding shorebird species to occur in New Zealand, with around 90,000 here each year. Virtually all New Zealand birds are from the baueri subspecies breeding in western Alaska.  They can be spotted in the Ngunguru Estuary.

Following the breeding season, birds generally begin arriving from early September, usually after a non-stop 8-9 days flight. They begin departing on northern migration from early March, heading for refuelling sites around the Yellow Sea. They do not breed until their fourth year, so each southern winter there are hundreds of non-breeding birds remaining in New Zealand.

The godwits receive a special welcome from the children at Ngunguru School when they return to the area each spring.

Meri Kirihimete! Merry Christmas and Seasons Greetings! Our Tutukaka Kiwi are all keeping us on our toes with four more Kiwi gals to keep an eye on and Harry playing Houdini - here is an update on END_OF_DOCUMENT_TOKEN_TO_BE_REPLACED