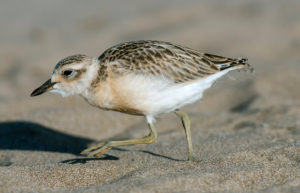 The dotterel’s common call is a sharp chip, often heard before the bird is seen. The call indicates alertness, with the rate increasing as the perceived threat level rises. The same call is also used to maintain contact. A high-pitched tseep is used to warn chicks to stay hidden. A long rattling churr is used when chasing intruders. A sharp werr-wit is used during territory boundary disputes.

New Zealand dotterels breed in monogamous pairs, and vigorously defend territories against other dotterels. The nests of northern New Zealand dotterels are simple scrapes in the substrate, sometimes sparsely lined or decorated, often with a marker of driftwood or vegetation. Three eggs are laid, usually from August or September, and are replaced if lost. Incubation usually takes 28-30 days; the fledging period is variable, but averages about 6 weeks. Double-brooding has been recorded but is not common. In both subspecies, female-female pairs occasionally form and lay combined clutches numbering 4-6 eggs. 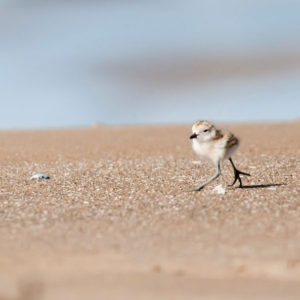 Nests of southern New Zealand dotterels are usually hollows in cushion plants or between rocks; they are extensively lined, commonly with tussock tillers. They typically nest later then northern birds, from October. Incubation and fledging times not well known; limited data suggest these are similar to those of the northern subspecies.

Both subspecies form post-breeding flocks, typically at large estuaries. They gather from January, and numbers peak in March. Some northern birds move back to breeding sites from May, with all gone by August. Flocks of the southern subspecies stay together throughout winter.

New Zealand dotterels undertake distraction displays to lead intruders away from nests and chicks; include ‘rat-runs’ and injury-feigning. Small chicks crouch and ‘freeze’ when danger threatens; older chicks typically run to the nearest cover and hide. Juveniles often wander widely before settling to breed. Once established on a territory, they are usually faithful to breeding and flock sites, moving predictably between them. Mate-fidelity is high, but divorces have been recorded.

Meri Kirihimete! Merry Christmas and Seasons Greetings! Our Tutukaka Kiwi are all keeping us on our toes with four more Kiwi gals to keep an eye on and Harry playing Houdini - here is an update on END_OF_DOCUMENT_TOKEN_TO_BE_REPLACED