We reintroduced the Native Brown Teal….. Pateke…. the fourth most endangered duck in the world to the Tutukaka Coast.

186 captive bred birds have been released over the last six years, and  are now successfully breeding right round the district.

Kiwi aside, our best indicator of the success of the Kiwi Coat pest control initiative is this summer’s pateke flock site count. We class a flock site a group of 5 or more birds.

From Ngunguru to Sandy Bay, (not including the Whananaki Sth flock site which numbers 135) we counted 217 pateke. The largest concentrations being 80 on the Ngunguru sewage treatment settling ponds and 50 under the road bridge at Stu Mcaulay’s.

Certainly I don’t see any ID bands on the legs now.

And that’s not counting the family groups all over the place we get reports of and don’t get include in the tally…. like the family that wander onto Cameron McInnes’ deck at night to pick up the cicadas attracted by the lights. 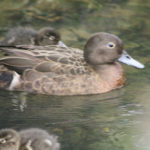 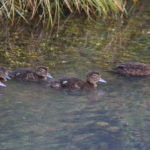 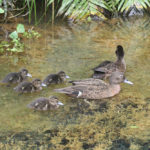 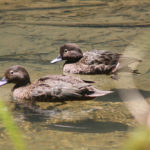 Next, consider that according to Dr Ray Pierce, if Pateke survive, Kiwi are likely to thrive!!”

Meri Kirihimete! Merry Christmas and Seasons Greetings! Our Tutukaka Kiwi are all keeping us on our toes with four more Kiwi gals to keep an eye on and Harry playing Houdini - here is an update on END_OF_DOCUMENT_TOKEN_TO_BE_REPLACED