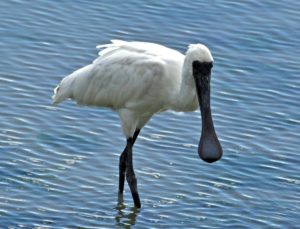 The royal spoonbill is one of six spoonbill species worldwide, and the only one that breeds in New Zealand.

It has successfully colonised New Zealand from Australia and is now widespread, breeding at multiple sites on both main islands, and dispersing to coastal sites across the country after the breeding season. In flight, birds hold their neck outstretched and trail legs behind, looking rather awkward, like a “Dr Seuss” cartoon bird. Their closest relatives are the ibises.

A large, bulky, long-legged waterbird with white plumage and black spoon-shaped bill, facial skin, legs and feet. During the breeding season, adults grow distinctive long white crest feathers on the back of the head or nape, up to 20 cm long in males. The crest is raised during mating displays revealing pink skin beneath. The bill is 136 – 220 mm long; the wingspan is circa 120 cm. Breeding birds have a creamy-yellow breast, a yellow patch above each eye, and a red patch in the middle of the forehead in front of the crest feathers. Females are slightly smaller than males, with shorter legs and bill. Outside the breeding season the crest feathers are smaller and the rest of the plumage often appears soiled. Juveniles resemble non-breeding adults but are slightly smaller with a shorter bill, dark tips to the main flight feathers, and lack a crest and coloured face patches. When wading in shallow water it often submerges the bill and repeatedly sweeps it in a wide arc in search of prey.

Voice: grunts, groans and hisses with chew and cho calls made at the nest.

Meri Kirihimete! Merry Christmas and Seasons Greetings! Our Tutukaka Kiwi are all keeping us on our toes with four more Kiwi gals to keep an eye on and Harry playing Houdini - here is an update on END_OF_DOCUMENT_TOKEN_TO_BE_REPLACED