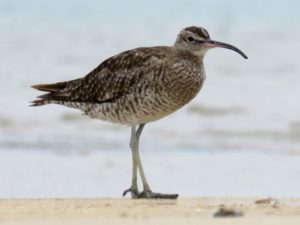 Whimbrels are large shorebirds which migrate to New Zealand from Arctic breeding grounds in small numbers. Most records are during the summer but a few birds occasionally overwinter.

In New Zealand they typically associate with bar-tailed godwits, from which they differ in being darker, having a striped head and a strongly down-curved bill.

Whimbrels are somewhat larger than bar-tailed godwits and recognisable by their down-curved bill and pale stripe down the centre of crown. They are mottled dark brown above, pale below, with much brown streaking on the throat and breast. The head is conspicuously striped, with a pale eyebrow stripe separating the dark eye-stripe and side-crown, and another pale stripe down the centre of the crown. The rump and back pattern is very variable, ranging from largely white with some brown mottling, to heavily streaked brown appearing almost all dark at a distance.

Whimbrels have been seen recently in the Ngunguru estuary. About 70 whimbrels occur in New Zealand annually. The East Asian-Australasian Flyway population is estimated at 55,000. Numbers are thought to be declining.

Meri Kirihimete! Merry Christmas and Seasons Greetings! Our Tutukaka Kiwi are all keeping us on our toes with four more Kiwi gals to keep an eye on and Harry playing Houdini - here is an update on END_OF_DOCUMENT_TOKEN_TO_BE_REPLACED