For the last few months, Guy Bowden has been monitoring the humble beginnings of a petrel colony. 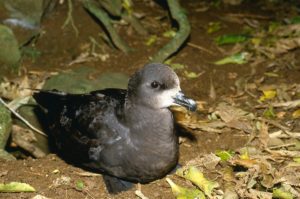 Tutukaka and the surrounding areas were once believed to be home to significant numbers of petrel, which, like many bird species in New Zealand, has been severely threatened by predation. It’s an exciting prospect to see this little bird carving out a place for itself in the Northland coastline once again.

During a coastal manuka seed-collecting mission, Guy stumbled on a series of burrows made by a sea bird. Unsure as to which bird the burrows belonged to, motion-activated cameras were set up outside the burrows, and it was soon confirmed that grey faced petrel or oi, were the occupants of the burrows.

The grey-faced petrel or oi, also goes by the name of northern muttonbird, and early Maori in the area historically collected the chicks for food – by local accounts they provided a major food source. This small, oceanic sea bird is nocturnal, and travels many hundreds – sometimes thousands – of kilometres out to sea where they feed on luminescent squid.

Returning to their burrows in mid-winter to check out prospective mates and to renovate their burrows, Guy says that their nocturnal courtship displays are spectacular, with aerial antics that leave the viewer speechless.

Motion activated cameras are being used for conservation purposes the length and breadth of New Zealand, and are becoming an indispensable tool. The footage from these cameras allowed Guy and his team to closely monitor the comings and goings of the petrel colony. They were able to witness the various stages of petrel breeding process, from egg laying, to hatching and chicks fledging, 118 days later!

Guy also placed a motion activated camera with a view over the petrel launching platform, which allowed him to watch the chicks’ first flight – a truly special moment.

As exciting as this new-found colony is, Guy stipulates how precarious its position is. Petrel chicks stay in their burrows for around 118 days, with their parents only visiting every 2 days on average, so for most of the time, the chicks are left alone. The burrowing nature of the petrel makes them particularly susceptible to predation, particularly from cats and stoats, so there are only a small number of colonies on mainland New Zealand.

Guy and his team have increased predator control around the petrel colony to give it as much protection as possible, and with the continued vigilance of conservationists like Guy, this colony will hopefully have a bright and long future on the Tutukaka coast.

Meri Kirihimete! Merry Christmas and Seasons Greetings! Our Tutukaka Kiwi are all keeping us on our toes with four more Kiwi gals to keep an eye on and Harry playing Houdini - here is an update on END_OF_DOCUMENT_TOKEN_TO_BE_REPLACED